By: The Compleat Angler

Casting or trolling a lure are the two most popular fishing techniques used today when it comes to fishing for trout.

Lures have come a long way since the “good ol’ days” and now with so many options, it can be very confusing as to which one to try. So, we at Compleat Angler have put together a little blog on what we suggest are some of the more popular and successful lures to use when targeting trout in a river, stream, lake or dam.

DEEP DIVING lures are those with a large bib on the front of the lure. The size and angle of the bib determines the depth in which the lure will dive. This is caused by the water pressure bestowed onto the bib causing it to dive. The angle of the bib also determines the swimming action for that particular lure. In most cases, hard body lures will have a tight wiggle action.

Deep diving lures generally dive deeper than 1m and are available in three different actions. These are floating, suspending and sinking. Floating lures are generally used in and around structure. This is because; if the lure bumps into a log, rock or stick, the angler can pause for a few seconds which will allow the lure to float up over the structure without becoming snagged.

Suspending lures on the other hand do as they say, suspend. This means that after a cast is made and the lure hits the water, it can be ripped down beneath the water’s surface and rather than continually winding the lure back, it can be paused in which it will “suspend” at the depth it has been taken too. This is particular effective around structure where trout might be hiding awaiting a meal. Once seen, the fish will strike at lightning speed.

Sinking lures obviously sink. Sinking lures can allow you to let the lure sink to a desired depth before trolling or retrieving which then allows the lure to reach even greater depths!

Diving hard body lures are great for trolling in lakes and great for fishing rivers and streams that have deep pools in which trout will often be sitting at the bottom of. Casting and retrieving deep diving lures in deep pools will enable you to target those trout where a shallow diving lure will not. 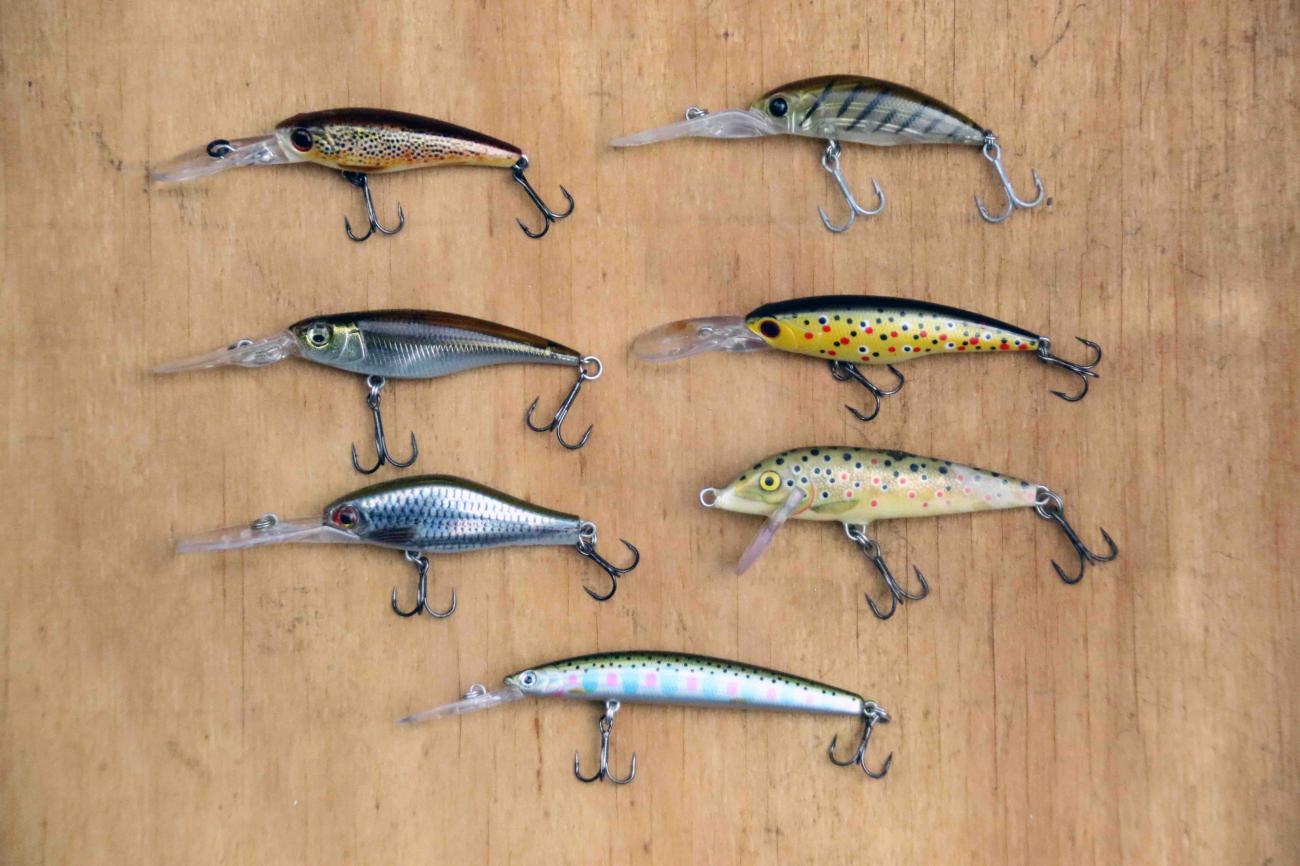 SHALLOW DIVING lures are those with a smaller bib on the front of the lure. These lures tend to run much shallower than their deep diving cousins and tend to dive to depths ranging from 30cm to a metre.

Different brands of shallow diving lures will also have different sized and angled bibs which determines the swimming action for that particular lure and will also come in three different actions; floating, suspending and sinking with the same principals as the deep diving lure actions.

Shallow diving hard body lures can be used when trolling in lakes, but are ideal when working shallow flats or banks where trout might be foraging for food.

Despite the different scenarios that shallow diving lures can be used, they tend to be favored by anglers that fish rivers and streams because they can be worked effectively in very shallow water without risking being snagged. For example, the typical situations these lures are used are; in shallow riffles, the heads and exits of deep pools and anywhere that a diving hard body is unable to be fished. In most cases, anglers targeting trout in rivers and streams tend to use a floating or sinking model depending on the section of the river being fished. 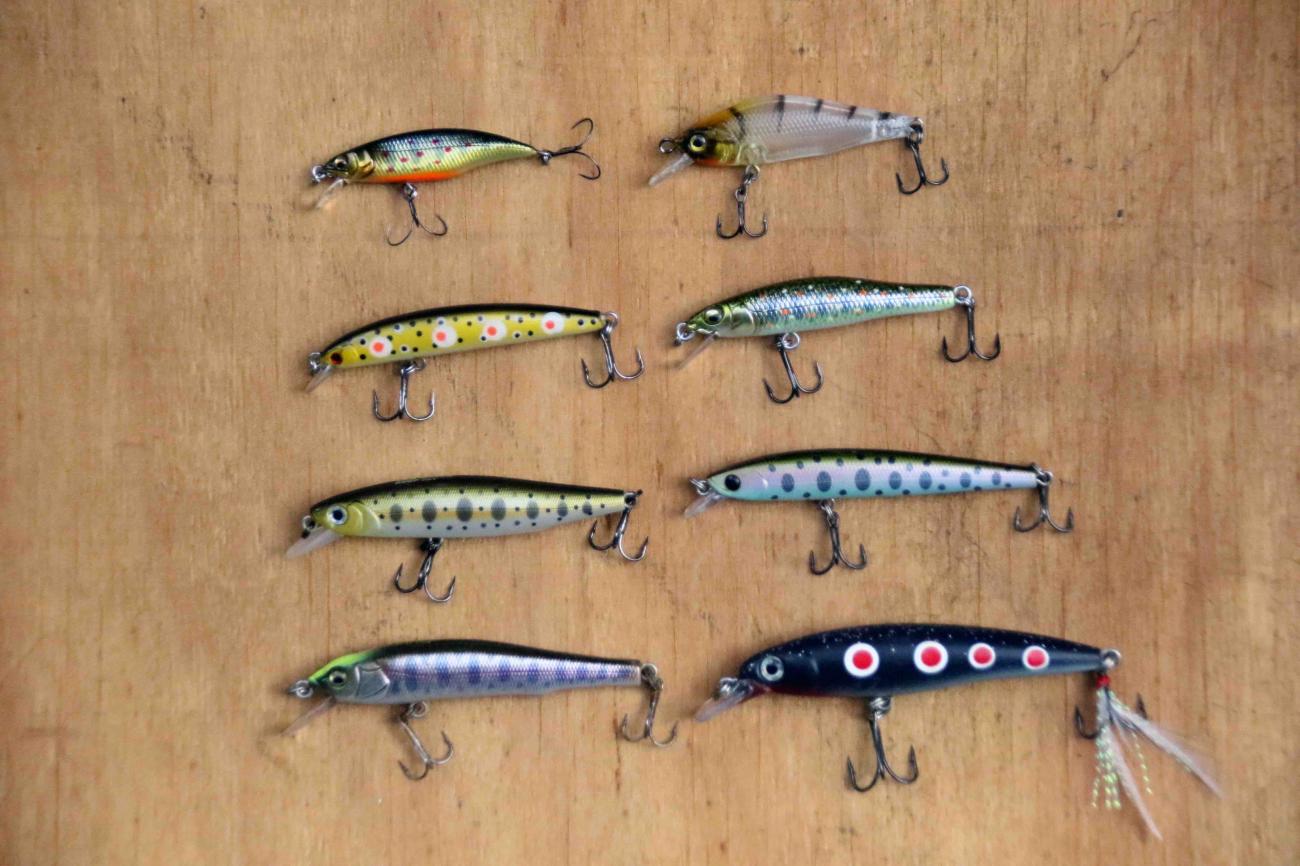 SPINNERS have been around for decades and long before the modern hard ABS plastic lures, yet they continue to be one of the most widely used trout lures today.

Whether you’re casting into the timber from a boat or walking the bank of a tight river, spinners are extremely effective on trout.

Spinners are almost a top water lure where once cast and immediately retrieved, the spinner will track just below the water’s surface at a constant winding speed. However, because spinners are available in a range of weights, after the cast is made and the lure hits the water’s surface, they can be left in free spool to sink for a few seconds before retrieving. This will have them retrieved back on a slight angle from their beginning depth back along the trajectory line towards the fishing rods tip.

Spinners are named “spinners”, simply because they are made up of a blade or blades that when retrieved, spin in the water, thus catches the eye of a hungry trout. Spinners also make noise when retrieved, as the blades spin, they act in a propeller motion in which a “whirring” sound is created, once again causing trout to come and investigate what the noise is.

SPOONS on the other hand are another lure which are mainly used by anglers fishing a river, stream or around a lakes shoreline. Spoons are available in a wide range of colours and weights. The location an angler is fishing will determine the weight of the lure required. For example, if walking the shoreline of a lake, spoons in a 10g or 12g weight can be cast vast distances allowing more coverage of the water. On the retrieve, spoons have a natural swimming action which imitates a sick or injured baitfish, which is always something a nearby trout is interested in. Given their weight, they sit in a similar depth to a spinner (just below the surface) however, they can also be left to free fall to the desired depth and then retrieved to cover the different water columns.

Smaller sized spoons are very effective in rivers and streams and ideal weights in these scenarios are from 3g to 6g, any heavier will sink too fast and potentially become snagged.

Undoubtedly the Tassie Devil lures are highly sought after by budding trout anglers. Though they can be cast in rivers and streams and from the shore of a lake in the same manner as a spoon, they are in their element when being trolled.

If you haven’t used one before, the Tasmanian Devil lure has a unique side to side swing action and every so often will do a 360 degree rotation. They are simple in design, but they are rarely passed up by trout.

Tassies are available in a huge range of different colours and the most popular weights are the 7g and 13.5g as they are the most widely used.

Rigging them is simple enough by threading the lure onto your mainline through the center hole followed by a red or orange bead and either a treble hook, single hook or twin single hooks. 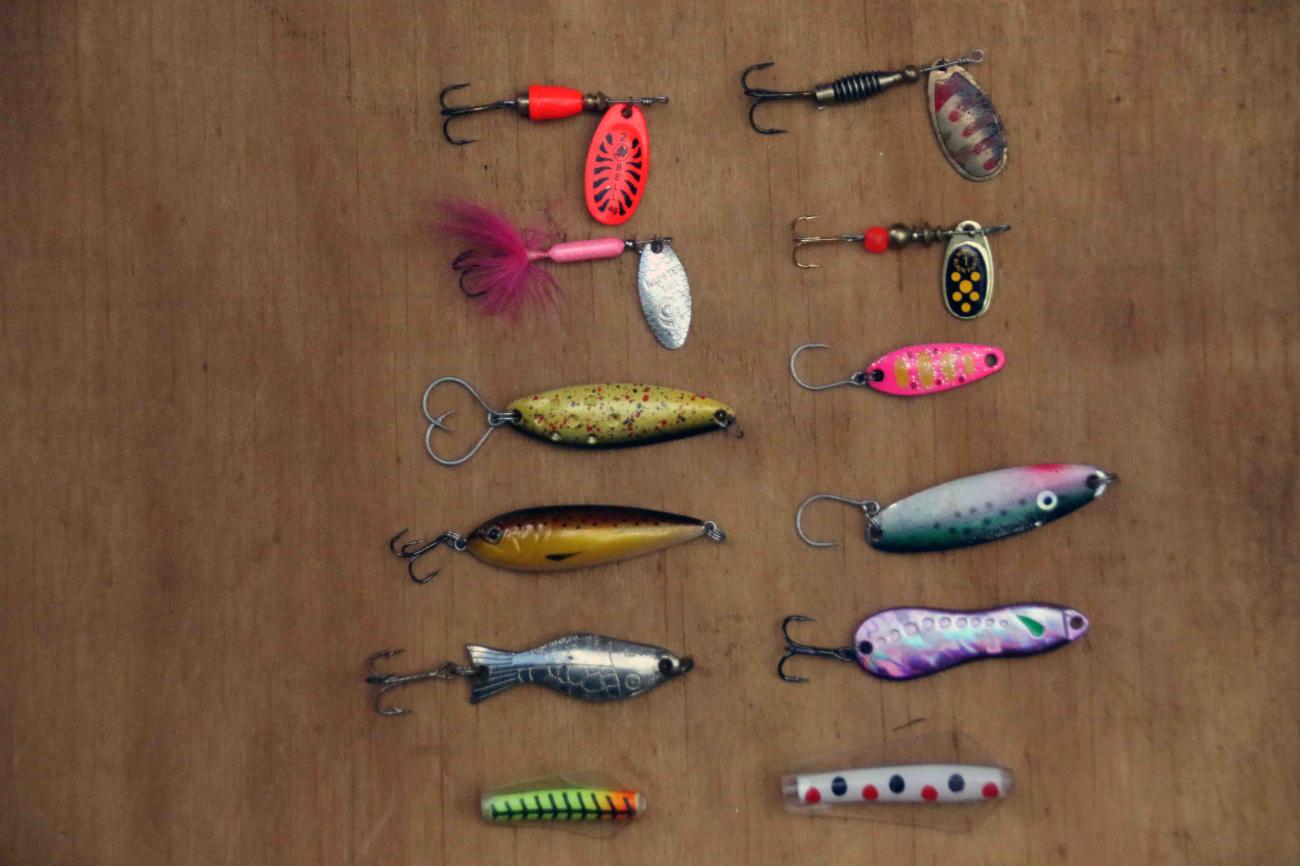 As far as mimicking a live baitfish, soft plastics are the number one style of lure to use. Available in a seemingly endless range of colours, lengths and styles, it can be a bit daunting to choose one, but as a rule of thumb, those designs that resemble the natural food of a trout for where you are fishing tend to work best. These include, bugs, minnows and yabby imitations to name a few.

To use soft plastics effectively, you need to thread your desired plastic onto a jig head (a hook with lead weight molded to it). This gives the plastic weight for it to sink, and also a hook, for obvious reasons! A soft plastic can be left to sink to the bottom in a lake, river or stream and then retrieved either by constantly winding back to where your standing or hopped so to look like a injured baitfish. These two techniques are highly successful however it is the weight of the jig head that will determine the depth to which the soft plastic will sink. This is mainly effected in rivers and streams where the current can push the plastic with its pressure, so knowing which jig head to use on any given day is vital.

Despite the array of styles, special consideration should be given to soft plastics that have a shad type tail. The shad tail thumps in the water creating an attractive noise along with a swimming action of a minnow or insect. 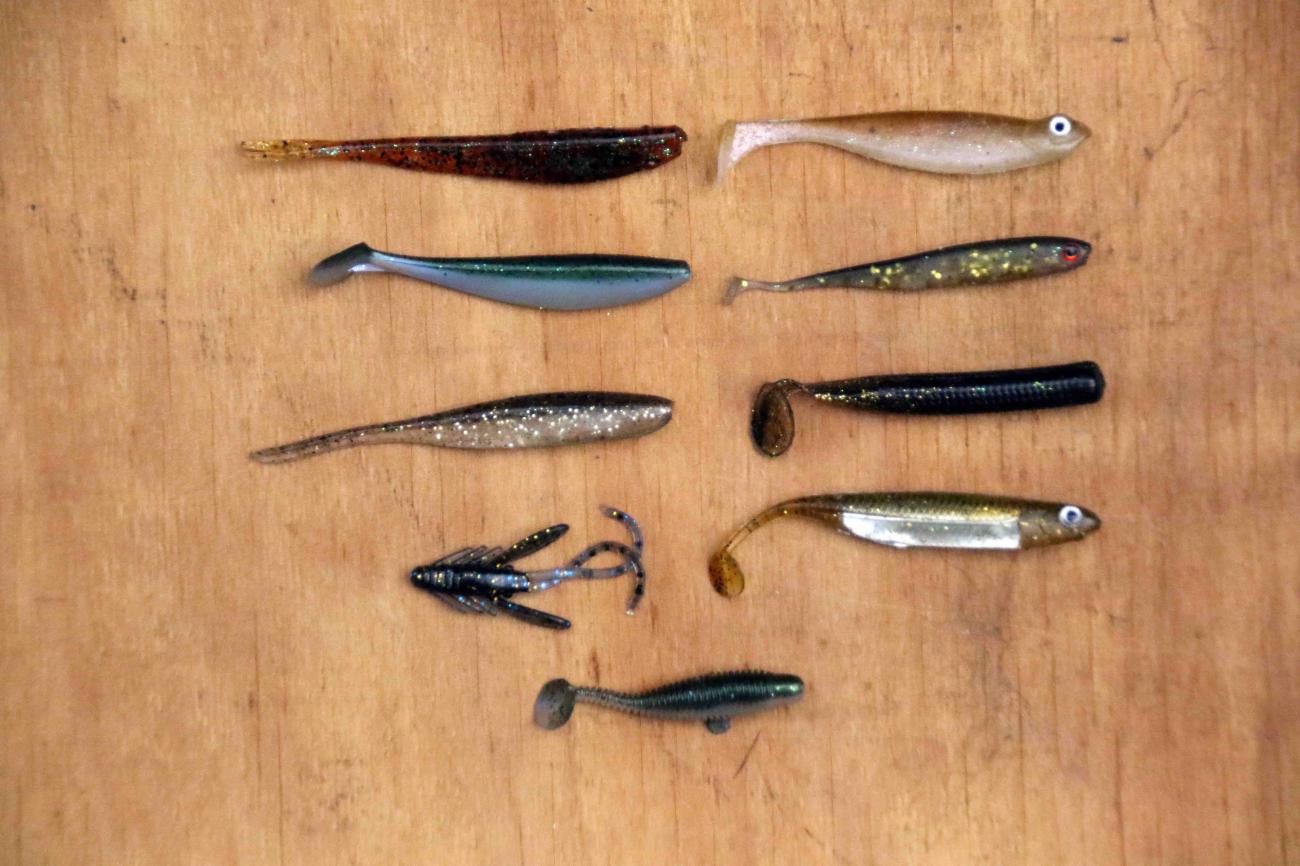 Top water fishing for trout really gets the heart pumping. Mainly because you simply cast your lure into open water in a lake, river or stream and once it lands on the water’s surface, you can begin the slow but steady retrieve. If you are using a bug, or cicada style of plastic, you will notice during the retrieve, the wings cause the cicada to “crawl” on the water’s surface as though it is a live cicada that has landed on the water and is trying to get back to land to avoid drowning. This is very tempting to a nearby trout! During the summer months, trout are on the lookout for cicadas in some rivers and often swim about listening for the commotion on the water’s surface. Once found, they attack with force.

Another popular top water lure is the popper. Poppers require a slightly different retrieval technique where the rod tip is to be held slightly higher than normal and while gently winding the reels handle 1 turn, twitch the rods tip back 10cm or so enabling the face of the popper to push water. Then wind up the line slack and repeat the process pausing the lure for a second or two while winding up the slack line.

Keep in mind, poppers and cicada baits shouldn’t generally exceed about 60mm in length otherwise they don’t tend to get a look in by a trout 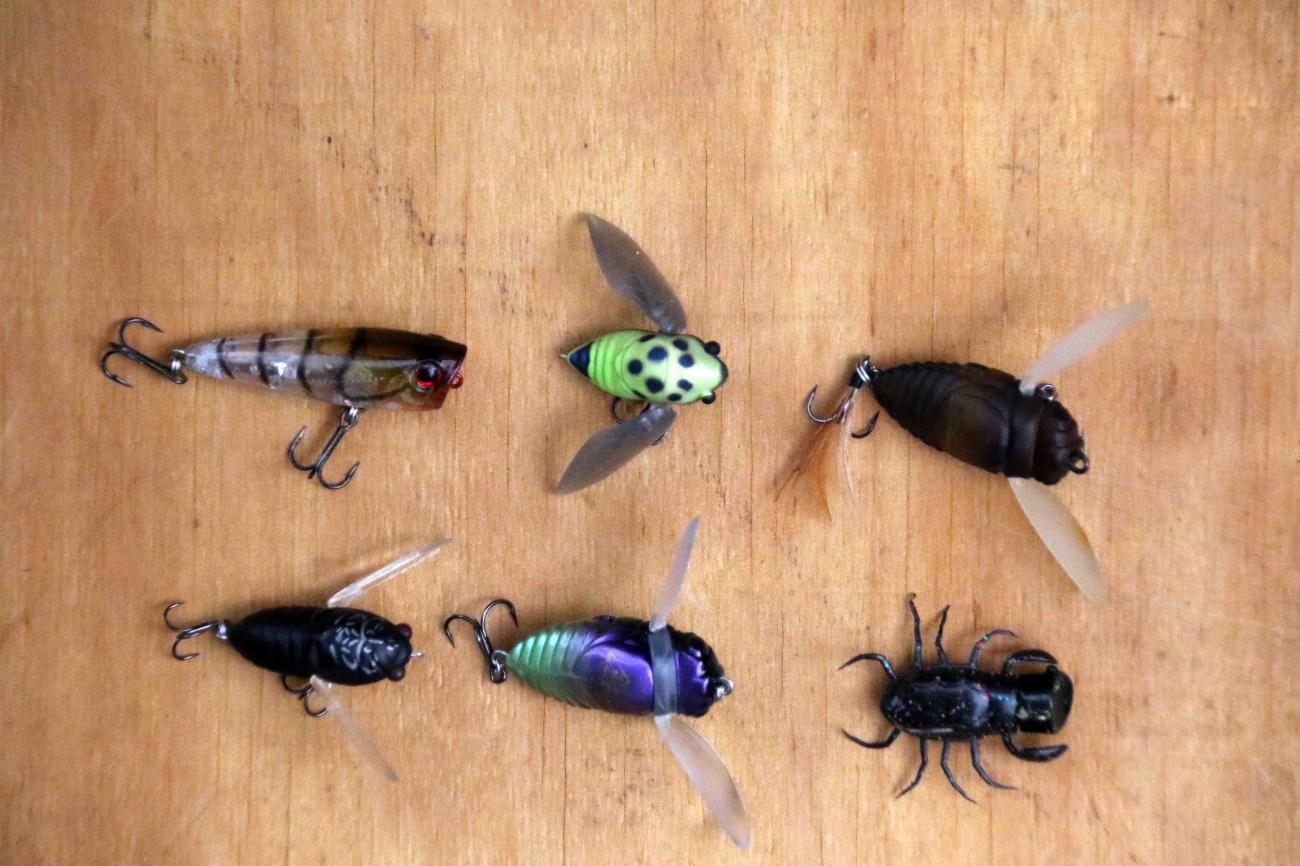 BACK TO WHAT'S HAPPENING
Scroll To Top